During our recent road trip we had lots of time for conversation and reminiscing.  A topic we spoke of was our Mentors, who were those special people who appeared in our lives and were our guardian angels.  We spoke of those outside our immediate family.

Without a doubt, my Aunt Helen  (Glynn)Ryan was my first mentor.  She was born in **"Cluainin" Aughnish, Kinvara, Co. Galway Ireland in 1905, one of 8 children, my father being the baby of the family.


Three of her siblings died from meningitis c 1918.  At the age of 18, with her sister Beatrice they sailed to New York.    She married, had three sons  and lived in a charming cottage with a 2 acre garden on Long Island.  An avid gardiner, roses being her specialty. During visits to Ireland she would always pocket some seeds but never managed  to grow shamrocks. In her garden was a grotto beneath an oak tree. 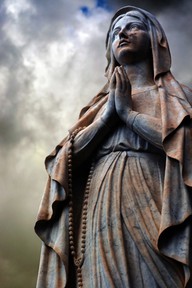 She was a baker, cook, knitter, sewer, crafter, painter and designer.  Once I could write she became my pen friend (my father used say they gave me her name and it was a big honour and a blessing to get someone's name). The letters would arrived with the beautiful American postage stamps, which I saved in my *didie box.  As an adult and living in North America, I visited Aunt Helen at least 4 times a year. She had integrity.  Her day was meticiously planned.  Up at 5 a.m.  Tea and a light breakfast. A one mile walk to 7 a.m. daily mass  then her daily chores of housework, gardening and planning. From 3 p.m daily she worked in her studio or sunroom.

Her china was Minton Persian Rose.She was a Matriarch and, loving to entertain, she had a 24- place setting of Persian Rose china. What was most remarkable and memorable was the rug in her dining room (9 x 12 ) which she designed and needlepointed in the pattern of her Minton Persian Rose.  Aunt Helen was disciplined and looked stern, yet she loved to hear witty stories and loved music. She lived her life by example.  She had no need to criticize nor judge others.
At her funeral many came up and told how she had touched their lives. Many had learned from her. She taught me needlepoint and the hours drifted by as we engaged in our art.

*a didie box is a box a young girl employed to keep her most important treasures, ribbons, shells and buttons for me*
**"Cluainin** was the name of our farm, my father being the surviving male inherited the farm and it was there I was born.  On our farm was the Martello Tower pictured above and this is where we played as children.  Today it is used as a weekend retreat.

Who were your mentors?
Posted by helen tilston at 5:57 AM