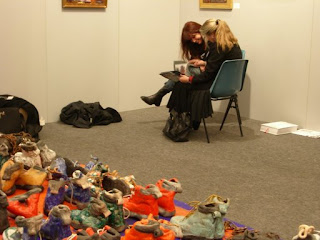 Guilia was born in Toscana. She studied Ceramic Design at Croydon College of Art and Design and Central St. Martin School of Art and Design in London, England. Guilia's exhibition piece was in ceramics. On a colourful table sat 51 ankle height boots, the type worn by schoolchildren in history. Each boot was in a different colur, one was striped, white red, blue and yellow, one was turquoise, some red, and cheerful colours, however, interspersed in the arrangement were some black boots and instead of laces, barbed wire was threaded through the lace-holes. I got to know Guilia very well, as our exhibitions were side by side. Guilia is 51 yrs of age and each boot represented a year of her life. The black boots symbolized the saddest years and tragedy. Guilia teaches and resides in Rome with her supportive and loving husband and family. Guilia is extremely gifted as an artist and I look forward to seeing her at a future Biennale in Firenze
Posted by helen tilston at 7:41 PM No comments:

My immediate neighbour at the Florence Biennale was Brigitta Santagoeds from Holland.
Brigitta is a very accomplished artist. Her exhibition was three paintings one called Blue Tree 1, The Strong Tree, Blue Tree 2. Brigitta is warm, fun loving and intelligent. I was particularly impressed by the bond of friendship between the Dutch Artists. They had met in Holland prior to coming to Florence and rather than ship their work, they rented a truck and transported all the art work. Brigitta was the navigator/map reader and co driver of the truck. I look forward to meeting Brigitta at a future Biennale
Posted by helen tilston at 6:56 PM No comments: 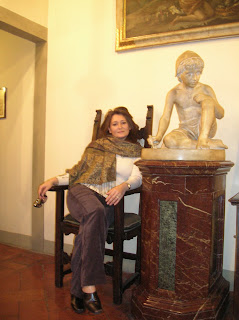 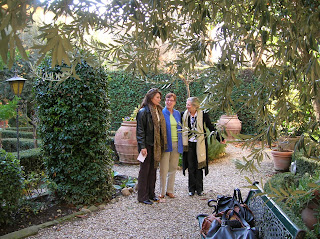 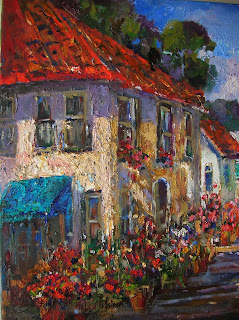 Granddaddy of all art festivals draws hundreds of artists, including three of IRB's own.

INDIAN ROCKS BEACH - An art show held in a fortress one city block wide with 840 artists representing 76 nations, the Biennale is considered the Olympics of the art worldand a feather in the cap of local plein aire cottage artists Helen Tilston, Mary Rose Holmes and Violetta Shtumeyzen, who were asked to participate.

Modern, new exhibit halls have been built into the historic fortress, explained Holmes "Over there they preserve the old rather than tear it down".

That is a tradition the cottage artists identify with: their main subjects have been the Indian Rocks Beach cottages that remain endangered while condo overkill has been robbing the city of its small-town ambience.

Tilston, on arriving in Florence on December 1, said she felt like the queen of England riding down the banner-lined streets with people saying they were honoured to have the artists.
"Even customs and immigration officials welcomed us and said how delighted they were with our presence"

From the opening ceremonial concert through the black tie gala dinner closing of the event on December 8, there were classes, lectures, films, even some time for coffee at local cafes. An unfortunate incident that turned into an unexpected victory occurred when an unhappy-looking Biennale participant at one of the cafes approached Tilston and Shtumeyzen. The artist, a Russian, explained in her native language to Russian-born Shtymeyzen, tsap tssap" meaning she had been robbed. Her passport and money had been stolen while she was hanging her works. "Clawed by the cat" was the way a Turkish artist sitting nearby described the robbing.

Tilston and Shtumeyzen had two free hours before a scheduled lecture and decided to stage a two-person fundraiser. They hurried back to the show and went from artist to artist to explain their cause and filled garbage bags with donations. When they counted their bounty, over $1,000. flowed from the bags. They then presented the artist who had lost her possessions with the money and managed to be on time for their lecture.

The nine international jurors for the show included distinguished figures in the art world from Brazil, Mexico, Florence, India, France, California, New York and New Orleans. "They looked like male and female models out of Vogue magazine with their beautiful leathers, colourful shawls and sleek boots," said Tilston.

Artists who are juried and who exhibit at the Florence Biennale receive a lifetime invitation. The plein aire cottage artists plan on attending again in 2009 and inspired by the energy of the Biennale are painting profusely for their exhibition at Guppys on the Beach.
Posted by helen tilston at 7:44 AM No comments: 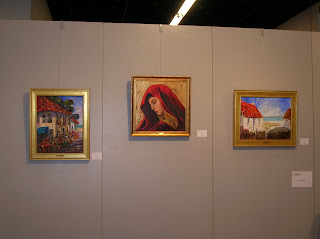 www.pleinairecottageartists.com Energy, excellent artwork, interesting workshops and networking kept the Plein Aire Cottage Artists, Mary Rose Holmes, Helen Tilston and Violetta fully engaged. The Florence Biennale is unique in that it is invitational only and Artist's work is juried prior to admittance. The Florence Biennale is the only Biennale where the artists are present. The combined energy and enthusiasm of the artists felt like lightening bolts travelling through the Fortezza da Bassa. The Biennale is sometime called the Academy Awards for Artists or the Olympics.www.pleinairecottageartists.com

The Plein Aire Cottage Artists have been invited to attend the Biennale for life.

Ciao Firenze and looking forward to seeing you in 2009

Following the Biennale we travelled to Greve in Chianti and painted en plein aire. Then onwards to Venice to view Museums and galleries and to paint. Three small paintings were painted on location.
Posted by helen tilston at 7:56 PM No comments: 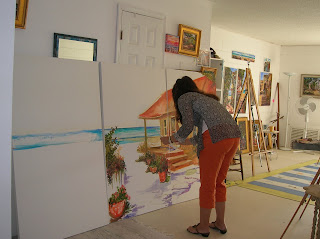 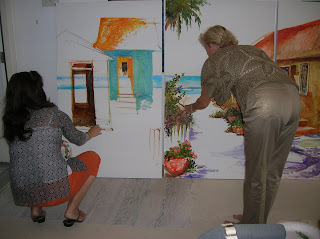 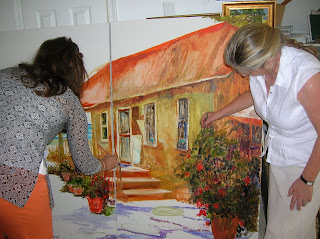 On February 5th, The Plein Aire Cottage Artists have begun a trip tych, which is the one of the largest pieces done by the group. The panel is 5 feet tall by 3 feet wide and is 3 panels. One panel painted by each artist. This piece will be on show at our upcoming Art Exhibit at Alric C.T.Pottberg Library Galler, Pasco Hernando Community College, West Campus, 10230 Ridge Road, New Port Richey Florida Tel. 727.816.3229 March 13th through April 15th, 2008. The energy and excitement of working on a trip tych creates the effect of lightning bolts on the canvas, as Violetta, Mary Rose and Helen Tilston tap the canvas, pounce on the canvas and delicately draw on the canvas. A local Press reporter stopped by and asked if we need to plan the painting, select the colours. We find the energy and thought process becomes one, rather than three individual chanels. We were on the same wave length. At the beginning of the painting, the horizon line is established and the roof lines, the direction of the sun, do we want to change what is to what we wish in order to add drama and pazzazz to the painting. We wanted the sun to be further West to create long shadows.

The painting is partially complete but will need two more sessions where we add the magic to the painting.

Jpegs attached of painting in progress.
Posted by helen tilston at 2:34 PM No comments: