The Music's Always There With you

More treasures found on the beach.    I have returned today to Southampton Beach.  It is a blissful sunny day 24 celcius.  The seagulls are singing and a killdeer is trying to lure me away with his broken wing trick.  I must be close to his/her nest so I shall move a little.  There is room for everyone.


I have been playing the music from my concert of last week and "Ave Verum" is my default song.

Two young girls "Pearl and Michelle" have stopped and chatted and  Michelle has asked numerous questions:  who am I, where am I from, how much money is a painting, where did I learn to speak English.  Michelle suggests that if I like I can put them in the painting but just to make sure that I show she is wearing a turquoise tee shirt and Pearl is wearning a pink shirt.  They inform me they are on their way to the shore to collect driftwood for their bonfire tonight. Marshmallows will be roasted.   Michelle is 7-3/4 years and Pearl is 4-1/2 yrs old.  Michelle is the boss.
I become engrossed in my painting and I can hear Michelle's shrill voice "Pearl make sure the wood is dry- Pearl collect  some more-Pearl only 5 more minutes".  They ascend the dunes "Pearl keep going, just a little bit more"  They have collected two shopping bags of kindle and one huge limb from a tree.
As they pass Michelle says "Helen keep painting, you better finish this today as it is going to rain tomorrow".  I  ponder ...  Are leaders born?  Is leadership learned? 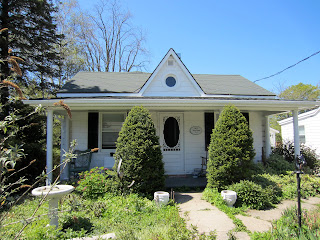 It is past lunchtime and I return to the village quite hungry. Mike and I head to the local cafe. We see the French Canadian specialty Poutine is on the menu. We share an order.


Have you tried Poutine?

Candle On The Water

A Candle looses nothing by lighting another candle
.
We are guests at a cottage at Southampton, Ontario. The owners are absent.


Southampton  has a wide sandy beach and one can walk for about four miles along the shore, of Lake Huron accompanied by ducks and loons.  The picturesque town has beautiful homes and cottages and gardens which rival English gardens for flowers and colour.  It is early in the season and many of the cottage owners have yet to return.  (these being second homes for many) I found myself alone on the beach each day.


A ten minute boat ride will take you to Chantry Island, which has a famous Lighthouse and caretaker's cottage.  Now an automated Lighthouse,  the only inhabitants on the Island are cormorants, ducks, Canada geese and seagulls.

"Candle on the Water, sung by Helen Reddy"

I set up my easel and there is not a human being in sight. I am happily painting when suddenly I hear  a trained male voice singing "Candle On The Water"

It was as though an angel were singing.  Suddenly two very handsome men appear and I exclaim  "Oh my God, two professional singers", to which they replied "Oh my God a real artist"  We chatted.  James and Chris, founding members of Edwin James Festival Choir  from Littlehampton, England were visiting and the following day were performing with the Chantry Singers in Owen Sound.    I quickly got on the phone and secured two seats for the concert titled:  "The Music's Always There With You"   This we found out was an experience not to be missed. Several songs sung individually and collectively by both choirs  had a water theme"  "Ocean World, Creatures of the Coral, The Ship that Sails, Wood River and Bridge Over Troubled Water.

Following the concert we chatted with our new best friends James and Chris and exchanged cards and phone numbers.  We look forward to seeing them in England when next we visit.


Two days later I returned to the beach and completed my painting. The weather was infinitely warmer. I slipped off my shoes and the warm sand was heavenly and I hummed "Candle On The Water"

What treasures have you found on a beach lately?

It is Spring time in Toronto. The lilacs, tulips and iris are in bloom, gardens are overflowing with flowers and al fresco dining is in demand

Interior Designer Annette  and her sister visited. Annette and I have been friends for more than three decades.    It is always a joy for me to research and find a new place to take Annette, as she no longer lives in Toronto.  Lunch at the wonderful local restaurant did not disappoint. We overstayed and leave. Our delightful waitress continued to serve us sparkling water and coffee.

The architecturally pleasing Four Seasons Centre for the performing arts was designed by Architect
Jack Diamond, who attended the University of Pennsylvania where he studied with Louis Khan. 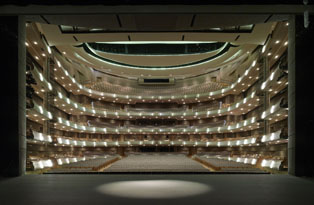 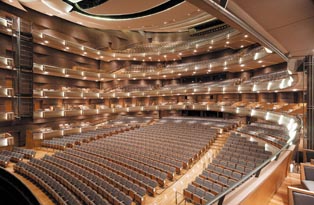 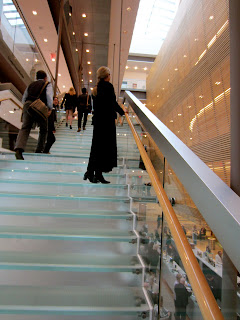 Ascending these stairs is always an exciting moment.

Do you enjoy Opera?  How was your week
Posted by helen tilston at 6:51 PM 62 comments:


Living in North America and being exposed to art and literature from many cultures I am sometimes not as current on Irish literature and the arts as I would like.  My youngest brother Thomas, living in Dublin, is an avid reader,  patron of the arts and is knowledgeable on music of all genres.  His gifts to me are usually books or CD's.  He is always so excited to tell when he attends a book signing, concert or  lecture of some up and coming artist.  A copy of Ghost Light by Joseph O'Connor came through my mailbox and I have just finished reading it for a second time.  I highly recommend it.

Set in Dublin 1907, a city of whispered rumours. A young actress begins an affair with a damaged older man, the leading playwright at the theatre where she works. Rebellous and flirtatious,Molly Allgood is a girl of the inner city tenements, dreaming of stardom in America. She has dozens of admirers but in the backstage of her life there is a secret.

Her lover, John Synge, a troubled genius, son of the once-prosperous landowning family, a poet of fiery language and tempestuous passions. Yet his life is hampered by convention and by the austere and God fearing mother with whom he lives. Scarred by a childhood of loneliness and severity he has long been ill, but he loves to walk the wild places of Ireland.  The affair, sternly opposed by friends and family is turbulent, sometimes cruel, often tender.

Many years later, an old woman makes her way across London on a morning after a hurricane. Christmas is coming.......
A story of love's commitment, of partings and reconciliations, of the courage involved in living on nobody's else's terms, Ghost Light is profoundly moving .

Edmund John Millington Synge (16 April 1871 – 24 March 1909) was an Irish play writer and poet. He was one of the founders of the Abbey Theatre. He is best known for his play "The Playboy of the Western World.
Synge suffered from Hodgkins disease  a form of cancer and at the time untreatable. He died just weeks short of his 38th birthday and was at the time trying to complete his last play, Deirdre of the Sorrows.

The Author is Joseph O'Connor
Joseph Victor O'Connor is an Irish  novelist. He is known for his 2002 historical novel Star of the Sea. Before success as an author he was a journalist with the Sunday Tribune  newspaper . He is a regular contributor to RTE  He is a member of Aosdana.


The Heart would make a good sound track for the Movie "Ghost Light"  My portrait I feel resembles my interpretation of  Molly Allgood .  I can wish to see it on a bill board.


Do you feel the O'Connor's have talent?  Have you read any of Joseph O'Connor's books?  Do you like Sinead's voice?