Bobby Orr one of hockey's greatest and how I met him

Recently I walked passed Indigo Book Store in Toronto.  A large banner in the window said
"Meet Bobby Orr here today. He will be signing his new book "Bobby Orr My Story" 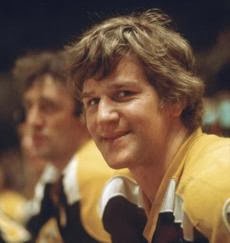 In the Winter of 1978 I decided to take an extra job as a waitress at Ryan's Sport's Bar.  This large, crowded newly hip bar attracted athletes from  the Toronto Argonouts and Toronto Maple Leafs and fans wanting to catch sight of their favourite player.  Not being a sports fan I did not know how to tell a football player from a hockey player.  Our Bar Man Jamie knew every player and statistic and was appalled that I did not know the regular stars that visited.   Cash and carry was the term used, where the customers paid each time a round of drinks was delivered to their table. Tabs were given to trusted clients who surrendered  their credit card to the waitress who held it till the end of the evening.(I had a tiny leather pouch where such cards were stored).

Two couples arrived and ordered drinks.  One asked if he could run a tab. I said "yes, of course, can I have your credit card"  I put his card safely in my tiny leather pouch.  They ordered appetizers and several rounds of drinks.  I chatted with Peggy one of the wives and she told me she had lived in Florida which I found interesting.  We talked of travel and all types of subjects.

As I was replenishing drinks at the side bar, Jamie the barman became animated and breathless, saying:  "OMG, OMG,"  I asked what was the matter with him.  He replied: "OMG Bobby Orr is here tonight".   I said "Who".  He said:  "Helen, don't start this with me...Bobby Orr is the greatest hockey player of ALL TIME" !!       I reached into my pouch and pulled out his American Express card and politely told Jamie that his name was "Robert G Orr"...       Needless to say, I was teased for asking this famous star for his credit card before I ran his tab.  Others said it was probably the first time Bobby Orr had dined out where his wife got more attention.

Thank you Heather Robinson Lost In Arles
for prompting this story. Heather served Lou Reed in a NYC restaurant

I must go down to the sea today

As the rain and wind rips the autumn leaves from the trees and the air whispers that soon it will be November, my mind wanders to the peaceful shores of Indian Rocks Beach and the sea.

My latest read is John Banville's  "The Sea" winner of the Man Booker Prize in 2005.    Now I eagerly  await the movie The Sea
starring Charlotte Rampling and Ciaran Hinde

I must go down to the seas again, to the lonely sea and the sky,
And all I ask is a tall ship and a star to steer her by,
And the wheel's kick and the wind's song and the white sail's shaking,
And a grey mist on the sea's face, and a grey dawn breaking.

I must go down to the seas again, for the call of the running tide
Is a wild call and a clear call that may not be denied;
And all I ask is a windy day with the white clouds flying,
And the flung spray and the blown spume, and the sea-gulls crying.

I must go down to the seas again, to the vagrant gypsy life,
To the gull's way and the whale's way, where the wind's like a whetted knife;
And all I ask is a merry yarn from a laughing fellow-rover,
And quiet sleep and a sweet dream when the long trick's over.