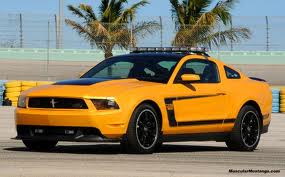 It is Friday and Sheila's birthday. "A" and I have decided to take her to lunch.  They pick me up and "A" is driving this super sporty 2-door car.  The new Mustang.  I am obliged to sit in the back seat.  Not an easy feat (feet -pun intended) as I wrap myself in pretzel form and slide in.  The car is brand new and has a great sound. Vroom! Vroom! My knuckles cling to the seat as she skids the tires exiting my driveway.  Male drivers roll down their windows and remark: "Nice car Lady"  Next red light:  "Hey Lady- wanna drag"**
The car had wide tyres and hugs the road.


Jonathan, "A"'s  son  is eleven years old.  He is a hard working and brilliant student who constantly gets A's in all subjects.  He loves cars and knows all makes and models but his all time favourite is the new Mustang.

"A" tells us that this is her son, Jonathan's new car, just delivered this week.  Each Friday she plans to drive "His" car to school to pick him up.    In Florida, younger teens at sixteen years of age can drive and all seem to get their driver's license and cars at this age.  Public transit is not very dependable  and if it exists the timetable and routings do not have the frequency needed.

Insurance for young drivers with new cars is frightfully expensive.

Jonathan's parents believe that Jonathan will be motivated to keep  his high grades and will be able to polish and look after his car for the next five years.  He will then  drive and also avail of  lower insurance on his Mustang car will be five years old by that time.

When I first heard this song by Wilson Pickett  I was a school girl living in Ireland. My brothers who were singers would ask me to take down the lyrics in shorthand.  We used listen to "The Teen and Twenty Disc Club from Radio Luxenburg each Wednesday night, hosted by Jimmy Saville.  I had no idea what Mustang Sally meant or what the song was about (Mustang cars still have not reached Ireland's shore) 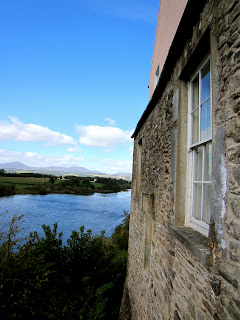 Dromana House and Gardens offers tours during the early months of summer.
We were very fortunate to be given a private tour, by the family, when we visited in September.
The House has been in the Villiers-Stuart family and their descendants for 21 generations.
Dromana is situated high above the Blackwater River in County Waterford, Ireland.
The House was originally a medieval castle built by the powerful FitzGerald family. By the end of the 17th Century, Dromana House was destroyed after a number of sieges but it was rebuilt. Between the 1750s and 1820s many additions were made to the house including a “great bow-sided ballroom.” There were also two large walled gardens on the estate.
During the 1820s the Dromana estate was in ownership of 30,000 acres.  Today there is 30 acres of gardens and approximately 600 acres of forest land. 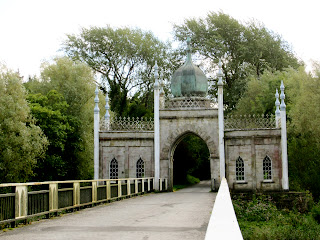 The avenue, which stretches up to 4 kilometres, is now publicly owned with the Hindu Gothic styled gate lodge over the River Finisk leading to Dromana House 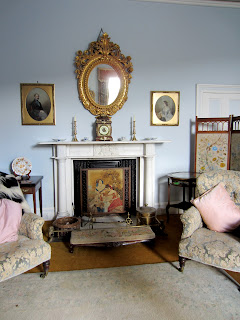 Our guide, the mother of current owner Barbara Grubb passionately told us the history of all 21 generations.  This she told through portraits and family photographs. One, the Countess of Desmond who apparently lived until she was 140 years old. 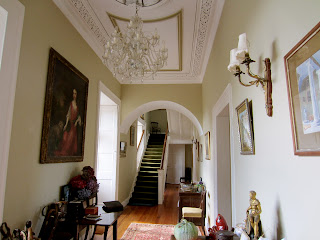 As we prepared to take or leave I questioned a sketch of Daniel O"Connell in the hallway. Beneath the sketch was this desk upon which was drafted the "Catholic Emancipation Act"

Daniel O'Connell (6 August 1775 – 15 May 1847); often referred to as The Liberator, or The Emancipator, was an Irish  political leader in the first half of the 19th century. He campaigned for Caholic Emancipation —the right for Catholics to sit in the Westminster Parliament denied for over 100 years.


We are silent as we consider the history of this house and that 21 generations have lived here.  The current owner has two young sons and history shall continue.

As we drive home, we play this Cd

The Skellig Islands, our Adventure

For several years, The Skellig Islands known as Skellig Michael (Gaelic: Sceilig Mhichíl or Sceilig Mór ) and Little Skellig  in the Atlantic, approximately ten miles from Portmagee, Co Kerry, IRELAND  have been calling me.  I had read George Bernard Shaw's letter to his friend Jackson which was written on 18 September 1910 from the  Parknasila Hotel of his expedition to Skellig Michael.


Two weeks ago our confirmation phone  call to Boatman, Brendan Casey,  ascertained that sailing was "a go".  Our twelve seater boat departed at 10:00 a.m. from Portmagee.  We were warned to wear warm clothing, sturdy hiking shoes and bring water and a snack.  Our  schedule was to spend two hours on Great Skellig and climb the 600 steps to the top of the rock and view the ruins of monastic life.


The harbour was calm and the day sunny and warm. 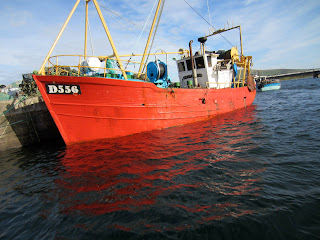 Skellig Michael A Christian monastery was founded on the island at some point between the 6th and 8th century, and was continuously occupied until its abandonment in the late 12th century.The remains of this monastery, along with most of the island itself, were inscribed on the UNESCO World Heritage List in 1996.  In Geeorge Bernard Shaw's letter, he describes Skellig Michael from which I quote "AT the top amazing beehives of flat rubble stones, each overlapping the one below until the circle meets in a dome  -  cells, oratories, churches, and outside them cemeteries, wells, crosses, all clustering like shells on a prodigious rock pinnacle with precipes sheer down on every hand and lodged on the projecting stone coffins made apparently by giants and dropped there God knows how.
Most incredible of all, the lighthouse keeper will not take a tip, but sits proud melancholy and haunted in his kitchen after placing all his pantry at our disposal" 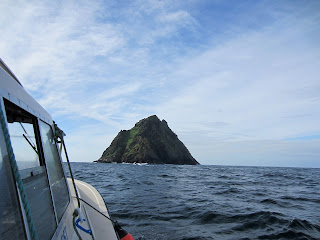 Two boats departed five minutes apart.   As we exited the calm channel  and enjoyed viewing rural life from our comfortable boat this was soon to change.  Suddenly the ocean began to swell and waves began forming and we clung tightly (I have bruises on my arms and legs from leaning and clinging) A wave washed overboard  on our port side and the  passengers in its path got soaked.  An unusually large wave struck out boat and  suddenly sick bags were distributed by  Captain Brendan with more than half our passengers now sea-sick. Oil skin coats were also given to us.   As we neared Skellig Michael, our Captain radioed the  other boat and it was determined  we could not land on  Skellig Michael - the waves washing over  the dock were 7 feet high.  We were disappointed but understood. 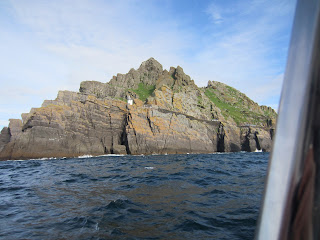 The roar of waves as they pummelled the rocks, the screeching sound of the gannets as our boat rocked along and recalling life for the monks who lived, self sufficient on Skellig Michael was my meditation on this Sunday morning.  I shall never forget this experience and look forward to re-visiting  Skellig Michael soon -  perhaps during the month of June when the puffins are in residence.

Captain Brendan switched on the radio and RTE Lyric FM was playing this tune, which will be  associated with The Skelligs


Have you visited Skellig Michael?
Posted by helen tilston at 7:46 PM 84 comments:

The Harp symbol of Ireland and Guinness

My morning walk to the bakery through the walled city of Youghal brings me past this shop.
It speaks softly to me as I head towards the baker for our morning cake of soda bread, scones and daily ration of bread and a treat, perhaps a meringue. 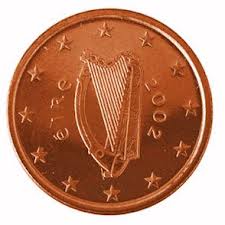 Since 1922, the government of Ireland has used a  left-facing harp, based on the harp in the library at Trinity College Dublin as its state symbol. The harp emblem is used on official state seals and documents including the Irish passport and has appeared on Irish coinage  from the Middle Ages to the current Irish imprints of Euro coins. Note:  The Harp faces left. 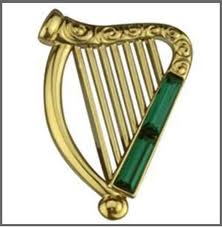 On March 17th, the Feast day of St. Patrick, this symbol or badge is worn in Ireland, plus a few springs of shamrock, picked fresh from the hedge rows.

Many visitors to Ireland enjoy a glass or pint or Guinness, the famous drink of stout manufactured in Ireland since Arthur Guinness started brewing ales from 1759 at the  St. James's Gate Brewery, Dublin. On 31 December 1759. It is said, he signed (up to) a 9,000 year lease at £45 per annum for the unused brewery.  Ten years later, on 19 May 1769, Guinness first exported his ale: he shipped six-and-a-half barrels to Great Britain.

Guinness also use the Harp as their symbol.  You will note the harp faces to the right in their logo and advertising.


I leave you with this beautiful Irish Harpist and singer, Orla Fallon singing a very special song for you.

Do you suppose the composer of Carrickfergus  patronized establishments that served Guinness?
Posted by helen tilston at 7:57 PM 61 comments: