Until we meet again, may God Hold you in the palm of his hand


In the community computer room, we sat side by side viewing one computer screen and taking turns in selecting our favourite you tube artists.  It is her turn and she asks for her favourite group from the 60's Procol Harum and "Whiter Shade of Pale".

As the tune ends, she enthuses "Isn't that just marvelous Helen;  I never knew what they looked like.  Her wheelchair she brings closer to the screen as we watch her late father playing with his orchestra and always, always she says "now Helen it is your turn to choose a song.  During my weekly visits we travel the world, listen to concerts, laugh at comedians.  Following a formal afternoon tea, with bone china cups and  cakes we return to her beautiful room.  As we wheel along the corridor we always stop to acknowledge the pen and wash portraits of her seven brothers and sisters, all painted on their second birthdays, then a painting of her beautiful father and mother.

Rose Ann, from childhood was a regular patient at various hospitals where surgeries were numerous.
Her glass is always half full.  Her needs simple.  She is generous, thoughtful and caring.  Possessing a photographic memory she can recall events and meetings with precision.  I first met her on our wedding day more than thirty years ago, she came to the church to extend her good wishes.

In Ireland, she is what we used call "A Black Irish Beauty".  Jet black hair, blue eyes and porcelain skin.

Rose Ann died on Friday, December 14th at the age of three score and nine.

I know I will miss her very much and the joy and fun we shared on those weekly visits.

Tomorrow is her funeral and snow is promised.  The poem "In memory of WB Yeats" by Auden comes to mind:

Indian Rock's Beach: An Architect and a Boat Parade 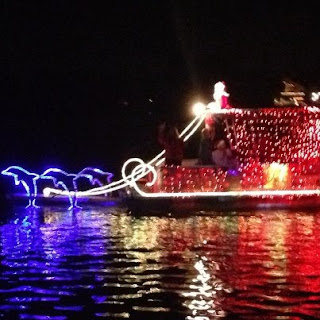 The small community of Indian Rocks Beach, Florida, and specifically the residents who reside on the inter-coastal waters, host their Christmas parties on boat parade night.   Last evening was warm and the waters were calm.  The boats wind in and out of the canals and there are prizes for the best decorated boats. 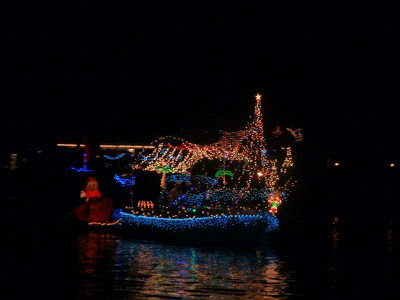 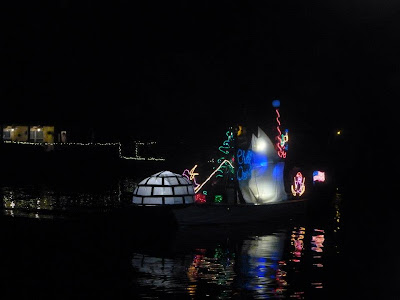 This past week  Sarasota Architectural Assoc.  honoured  award winning architect and resident of Indian Rocks Beach   Dwight E Holmes.
Holmes on  graduating  from Georgia Tech set his eyes on the Gulf Coast of Florida  and was hired by Mark Hampton
The Sarasota School of Architecture

The years: 1941 to 1966
The place: Sarasota, Florida
The story: Inflected by local climate, construction practices, regional culture, and Florida life-style, the work of the Sarasota School of Architecture founded by Ralph Twitchell and counting Paul Rudolph, Mark Hampton, Victor Lundy, Gene Leedy, and Jack West among its practitioners, marks a high point in the development of regional modernism in American architecture.
In Europe after World War I, a startling new approach to architectural design emerged. The International style (or Bauhaus as it was known under the European school that taught it) turned its back on historic precedent and exploited the new materials and technologies of the day. Traditional decorative elements or references to past architectural styles were swept away, producing a minimalist architecture of flat-roofed buildings with smooth, unornamented walls and delicate, carefully proportioned facades.
While the Sarasota School found its inspiration in part from the philosophies of the Bauhaus, it incorporated forms of regional Southern architecture, using patios, verandas, modular construction and raised floors to open up its buildings for greater ventilation in pre-air conditioning days. The style added a play of light and shadow, and the color and texture of indigenous low maintenance materials, softening the cold machine aesthetic of the Bauhaus. This approach to design strengthened the connection between architecture and environment, allowing Sarasota School buildings to respect and blend well into their sites. The result was a regional modernism which blurred the distinction between the indoors and outdoors and accommodated the lifestyle and climate of southern Florida.
"Sarasota in the 1950s was one of the most important places in the world for architectural creativity, where the greatest design movements of the day came together."
– Carl Abbott FAIA, original member of the Sarasota School of Architecture

One of Holmes first projects was a home for his family in South Tampa.  Should it look familiar to you it has been featured in major magazines over the years and is studied by architectural students. 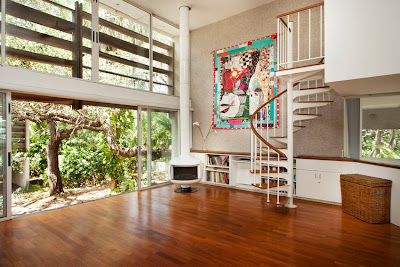 Located in South Tampa this house was constructed more than forty years ago.  There are several unique houses in this area designed by Holmes 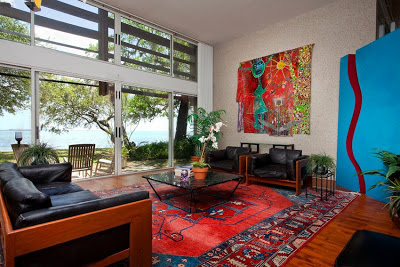 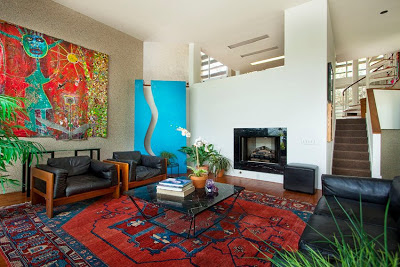 Holmes  designed a highrise building in  Sarasota, a Museum, several schools and continues to design and build spectacular award winning buildings.  His son, Scott Holmes a sought after young architect works with the firm

The audience listened attentively as Holmes responded to a question about LEED archicture and sustainable building (LEED = an internationally recognized green building certified system).
"If architects were doing their job properly and being responsible there would be no need"