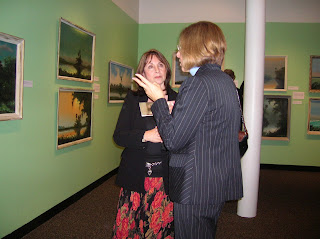 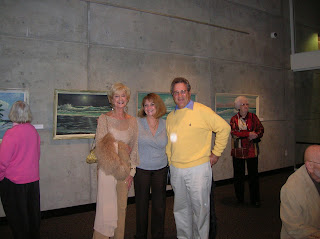 On Saturday January 26th from 7.00 p.m the George Algernon Speer Jr. Collection of 22 Highwayment paintings will be on view for the first time at the Leepa Rattner Museum of Art. The show runs through March 9th.

Speer, a fourth generation Floridian and attorney whose cases often were tried in District Court in Palm Beach frequently drove through Fort Pierce, where he became a supporter of the black artists who sold their paintings along the roadside and came to be known as the Highwaymen. He collected 22 paintings and paid on average $20. per painting. 20 of these paintings were deposited in the Attic of his Sandford home, as his wife's taste in art was quite different. She did allow two Highwaymen paintings to hang in their formal home.

Their daughter, Plein Aire Cottage Artist Mary Rose Homes display some of the paintings at their beach house at Indian Rocks Beach, where the prickly cyprus interior and the gulf of Mexico provide a tranquil background.

A young student has been painting with the Plein Aire Cottage Artist, namely John Holmes,13 yrs who is the grandson of Mary Rose Holmes. John has shown an interest in capturing on canvas old Florida and is a keen drawer. Two of John's paintings are hung at the Leepa Rattner Gift Shop.
Posted by helen tilston at 2:38 PM